Some records are not worth talking about 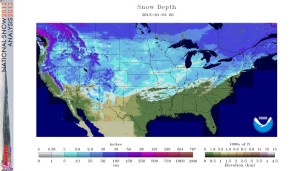 But AccuWeather.com has set a new standard. They recently reported “January 1 Snow Coverage Sets New Record for the United States.” But read on. The previous record was set in 2010.

Now perhaps it was a slow news day on January 4th when they published this piece. But I must say give me a break. The records only go back ten years. This is data that NOAA releases each day. With just ten years of data one can expect that a new daily record will be set three times in a month. And that is just an average. Is this really news?

But AccuwWeather goes on. They then tell me that snow cover “increased dramatically” between December 1st and January 1st. What did they expect? Isn’t this the norm? After all there has been an additional month for the temperatures to get colder with the onset of winter and more time for snow to accumulate.

Posted by Larry on January 7th, 2013 Posted in Statistical Literacy
(Comments are closed)