Do we need more college graduates? 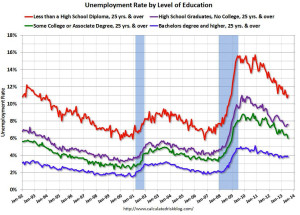 Last week, after the release of the most recent jobs report by the Bureau of Labor Statistics, the Calculated Risk blog posted the image at the right showing the unemployment rate over the last twenty years by level of education for those age 25 and over. Bill made four comments about the graphic.

Note: This says nothing about the quality of jobs – as an example, a college graduate working at minimum wage would be considered “employed”.

The observation that education matters is clearly true. Also true is his statement that the graphic says nothing about the quality of the jobs. The claim that the unemployment rate is moving sideways for those with a college degree can be argued. The rate does seem to have leveled off in the last year. However the graphic says nothing about finding new employment. It is just simply the wrong set of data to answer any questions about finding a new job.

Meanwhile this week Kaiser over at junkcharts picked up on the Calculated Risk post and made some very good points in his elaborations. After recognizing that the chart is for those age 25 and over he says:

Actually the chart does not really mask the situation for new grads as most of them are not yet age 25. The real problem here is that we do not have the data for recent grads at hand in either of these two posts. Kaiser is right however in telling us that using this graphic does lead some to say we need more college grads. Again the graphic and the data in includes is not at all informative in addressing the question of the wisdom of spending money and going into debt to pay for college.

The solution then is to create your own fine print. Spend inordinate amounts of time understanding how data is collected. Dig deeply into how data is defined.

No, this work is not sexy. (PS. If you can’t stand it, you really shouldn’t be in data science.)

This is exactly what is needs to be done here.

In a two years ago on employment and education Kaiser said:

The issue of how many college graduates we need in this country is not a new one. Questions about salary depression due to “too many college graduates” are not a new one. Questions about college graduates taking jobs requiring only a high school diploma are not new. They have been around since the 1970’s. Two papers released by the BLS in the 1990’s are relevant to the discussion and can be found here and here. The firs to these two paper starts with the question “If as some analysts contend, the rising relative wages of college students in the 1980’s suggest a shortage of these workers, why did one-fifth of them accept jobs that traditionally do not require a degree for entry?”

In data, there is often no fine print to be found. In Big Data, this problem is aggravated by a thousand times. Unfortunately, magnifying blank is still blank. So, having the magnifying glass is not enough.

The solution then is to create your own fine print. Spend inordinate amounts of time understanding how data is collected. Dig deeply into how data is defined.

No, this work is not sexy. (PS. If you can’t stand it, you really shouldn’t be in data science.)

Looking at other research that has already been done and other sources of data that are available is a big part of the work he is referring to. Also part of that work is creating your own tabuations and graphics from the raw data. Let me suggest that the data in the American Community Survey (ACS) could be very useful here. This survey conducted by the Census Bureau is the replacement for the long form in the decennial census. It is a very large set of data. Included is information on education, income, and employment. It should be possible to look at data on the unemployment rate for both college graduates and high school graduates by single year of age. (The definition of unemployment used in the ACS is not quite the same as the official measure used in the Current Population Survey by the BLS, but those differences should not create any significant problems in the analysis.) Combining the unemployment data with the education and income data can also provide a picture of how much income is impacted. Further work can be done by tracking the data over a number of years using the ACS data. If I can swing some free time I’ll play around with the data. I do enjoy playing with data.

This data only gets an income and employment. It will not address the question of do we have too many college graduates. Remember though that the individual choice is to maximize their earnings. So if getting a college degree lowers everyone’s income they are better off it getting the degree increases their own income over what they would have earned if they had chosen not to go to college. Somehow the cost of the college education and the lack of earnings while in college need to be factored into their calculations. The question of the number of college degrees is a societal question that the individual trying to maximize their own earnings is less concerned with.