West Nile Virus – How Bad is it?

The Washington Post ran a story on September 12th titles “Does the West Nile outbreak signal an epidemic of viral epidemics? Yes and no.” Somewhere in the process of writing there was a disconnect between the written content and the graphic that accompanies the piece. 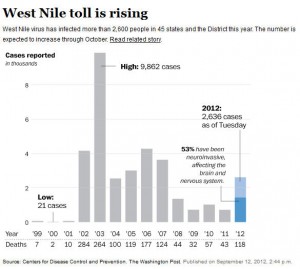 So what is wrong. The article highlights the”2,636 officially reported cases nationally” by the Centers for Disease Control and Prevention (CDC). While this is an accurate citation of the current numbers the CDC itself in its data release states:

Lyle Petersen, director of the CDC’s division of vector-borne diseases, said this year’s West Nile season is on pace for a record number of severe infections, such as brain inflammation. These infections are considered the best indicator of the epidemic’s scope because they are most consistently reported to health authorities. Most people who are bitten by infected mosquitoes don’t develop symptoms, and their cases are not reported.

In short the message is don’t use the data on the total number of reported cases to track the disease. But this is exactly what the Washington Post did with the graphic. They might have had second thoughts when they gave a breakdown for the this year in the graphic for the number of total number of case and the more serious case impacting the brain. But this is insufficient as there are no numbers to compare. What is the number of serious cases in previous years? A serious secondary problem with the graph is that prior to 2012 the data is for the entire year, while for 2012 the data shows only the number of cases through September 11th. Thus even the totals for the year cannot be compared as no information is provided on the proportion of cases for the year the occur after September 11th in a typical year. 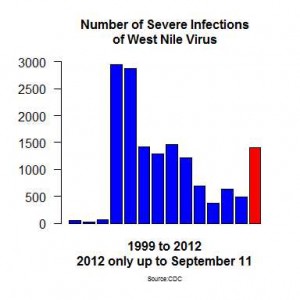 The graphic also raises the question what happened in 2003? This is important as the article tries to point to that as the high point of the disease over the last decade. What is the reason for the high number of cases in 2003. The graph as the right shows only the number of serious cases over the same time period. The big increase in the number of case from 2002 to 2003 is gone. This happens because there was a very large number of non-serious case reported in 2003 that is not typical of other years. The graph still raises the question of why there were so many more cases in 2002 and 2003 relative to other years. Also the current year at this point does not really appear to be that much out of line. It actually look like the number of cases has been unusually low for the previous four years and now has returned to more typical levels. What remains to be seen is how many more case will be identified during the remainder of the year.

A few more comments are in order on graphic design issues in the Washington Post article. The title of the graph is very misleading. “The West Nile Toll is Rising.” The graph fails to support the claim. The visual clutter in the graph is extensive. There is no reason to label the high and low points on the graph and provide the exact number of cases in each year. That information does not contribute to the intended message. Since, as I said earlier, the split of the data for 2012 into serious cases and total cases provides no useful information the verbiage surrounding that one data point unnecessarily clutters the graph.