The Recovery – The Women vs. The Men

Not long ago Romney was making the case that women have been disproportionately impacted by the current recession. This week a CNN blog posted an item ” Where have all the women’s jobs gone?” See the more in depth article here. They were making a twofold case it seemed. First the author of the piece, Tami Luhby, was claiming that woman workers have been left “largely in the dust” in the current recovery. Secondly she was making the point that this position crosses party lines when she cited the study by Heather Boushey at the Center for American Progress. The group was characterized as “left-leaning” in the piece. Neither CNN linked back directly to the full original article: ‘Man-covery’ Women Gaining Jobs in Recovery at a Slower Pace than Men. This Center for American Progress report can be seen as something of a follow-up to their report a year ago, Changing Places, Women Continue to Lose Jobs as Economy Grows, which made the case then that women were be hurt disproportionately by the recession.

But what is really going on?

Romney, as I pointed out, made the error of choosing the wrong starting point for his calculations and compounded that error with methods he used for calculating job losses.

CNN makes the error of presentation by mixing number and concepts in their analysis. They have dramatically overstated the actual situation. Romney used counts of jobs while the Center for American Progress used numbers of people with jobs. CNN failed to clarify this difference.

The Center for American Progress failed to look at the total situation. Their focus was so much on the impact of the recession and the recovery on woman that they failed to recognize the actual relative impact of the recession and recovery on women vs. men. The graph below shows the impact by comparing the employment losses of women and men. I choose to use employment counts for those ages 20 and up as that was the data used by the Center for American Progress. I bench-marked both groups using their respective employment levels in January 2008. Thus graph shows the monthly employment levels relative to those levels in January 2008. This date was chosen as it was then that employment was at its peak as the recession began. The CNN claim that woman have been “left in the dust” in the recovery is clearly not supported by the data. 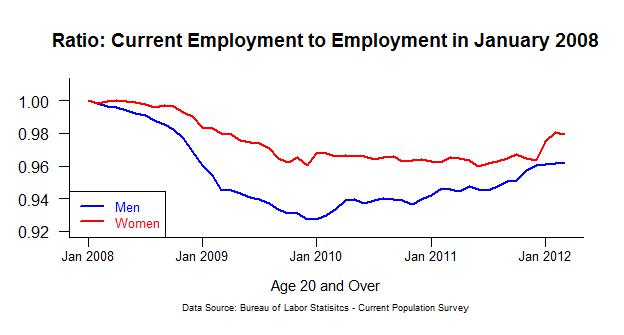 Employment for men declined to about 92.7% of pre-recesssion level, while that for woman declined to 96.0% of pre-recession levels.This differential impact is clearly evident in the graph with the steeper decline in employment for men. Once the employment reached their lowest levels men clearly began to recover more quickly than did the woman. It is this feature of the recovery that has fueled the arguments that woman were more seriously impacted by the recession. Yet even with the slower recovery for the woman the men still remain, as they have throughout the recession with greater employment losses than those suffered by woman.

Perhaps the country would be better served and the political candidates and their respective interest groups would show better understanding of the economy if they would focus on job losses and how to create a more effective recovery instead of focusing on differences between the sexes that are not happening in ways they would like to claim they are.

Posted by Larry on April 24th, 2012 Posted in Telling the Full Story
(Comments are closed)