The NBC Nightly News last night (Thursday March 22nd) reported on the state a marriage in the United States. The data they said came from “the government.” It did not take too much effort to identify the source. It was a new report put out by the National Center for Health Statistics(NCHS) under the Center for Disease Control(CDC). The report was titled: “First Marriages in the United States: Data From the 2006–2010 National Survey of Family Growth.”

The problems in the reporting were many and were not confined just to NBC. Although NBC managed to make one major blunder in failing to adequately quality control their report prior to air time. They missed the very basic step of checking that what they said was actually said in the report. 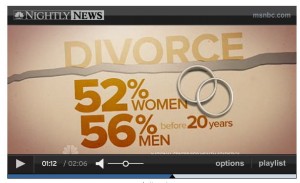 While showing the graphic on the right they said was:

More than 50% of first marriages end in divorce before the 20 year mark.

The problem was that statement is not in the report. What the report said was:

Other trends are evinced by the detailed marriage histories in the NSFG, which provide information on how long first marriages last. The probability of a first marriage reaching its 20th anniversary was 52% for women and 56% for men in 2006–2010.

NBC reversed the numbers and got the definition wrong that NCHS used. NBC claimed that “56% of men’s first marriages end before 20 years.” NCHS on the other hand said 56% last 20 years. NBS reversed what NCHS had said in the report. The second major failing was NBC used the term “divorce.” The NCHS term was “survived.” The 44% of men’s first marriages that did not survive to the 20 year mark were also the victim of separations and the death of their spouse. The NCHS report did not give any breakdowns of survival rates by divorce, separation, or death. 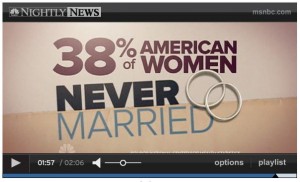 “….one more trend that may be the biggest cultural change of all.Today Nearly four out of every ten American Worman have never been married.”

The NCHS report makes it very clear that the universe of people they are referring to throughout the report are ages 15 to 44. NBC never mentions this very important piece of information. The correct statement from the report is that 36% of woman ages 15 to 44 have never been married. To apply this number to the entire population as NBC did is very deceptive. It excludes from the count all woman over age 44 and includes in the count woman under ages 15 to 17 who very few would expect to be married. A much better statistic would be the percent unmarried age 18 and over. The report shows that in the 40 to 44 year age the percent of woman never married was only 10.1%

Posted by Larry on March 23rd, 2012 Posted in Methodolgy Issues
(Comments are closed)