Cost of Child Care Going Up – Is That the Right Story? 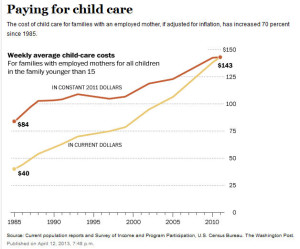 A few days back I spotted the graphic on the right in the Washington Post. It was a stand alone graphic with no article to explain the image. But the graphic does send a powerful message that the cost of child care has gone up substantially in the past 25 years.

But as it turns out this is not the full story, or even the right story. In this case the single graph fails to capture what is happening to child care costs.

The graphic was contained in the recently released Census Bureau report “Who’s Minding the Kids? Child Care Arrangements: Spring 2011.” The Washington Post made only minor changes, but most notably added the header highlighting the 70 percent increase in the cost of child care since 1985.

The data in the graph is correct and the headline is correct. The Census Bureau survey data shows that the cost has risen 70 percent. However to understand what has happened in that time period the Census Bureau also provided a much better graphic in the press release for the report that shows a much more complex situation exists. In this graphic we find that while the cost of child care has gone up the percentage of family income required to pay for that child care has remained stable. 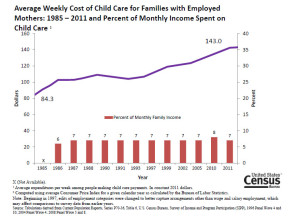 What is going on? Many things have changed over the last 25 years. Incomes have changed, family structure has change, the number of dual income families has changes. All of these as other factors undoubtedly influence what we see in the graph.

This was a much more complex story and deserves more than a simple graph without any analysis of what has transpired over the last 25 years.

Posted by Larry on April 17th, 2013 Posted in Telling the Full Story, The Media