Statistics and the Australian Open 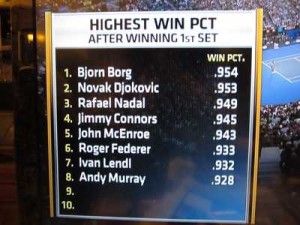 I watched parts of the Federer-Tsonga match in the Australian Open a couple of days ago. Federer won the first set of the match. At that point the announcers started a discussion of the players with the highest winning percentage for a match given that the player had won the first set of the match. After a bit of back and forth between the two announcers they displayed the graphic on the right.

One major glitch in the graphic is that ESPN failed to properly understand what a percent is. Reading the graphic as it is presented Federer has less than a one percent chance of winning a match if he wins the first set. The error – a misplaced decimal point. Federer’s actual record was 781 wins and 56 loses, or 93.3 percent.

The announcers led into the discussion noting that the statistic was representative of the then current situation in the match with Federer having beaten Tsonga in the first set. The statistic represents Federer’s record in all matches. That number is not likely to be representative of his chance of winning against a player of the caliber of Tsonga who is currently ranked number eight in the world.

There is an issue with the comparability of these records across players. We all like to look at the players and say one is better than the other. But is must be realized that the these records are based on somewhere between 400 and 1100 matches. At that level if Federer had won one additional match,out of 800, he would be ranked ahead of McEnroe. So while McEnroe is ranked number five and Federer is ranked number six. The difference is largely meaningless. The order would have changed if Federer had won just one of the 56 matches he lost or if McEnroe had lost just one of the 775 matches he won.