Matt Asher at his Probability and Statistics Blog posted a piece titled “The surprisingly weak case for global warming.”

Given all of the research and data available it is hard to conceive of someone making such a claim. Last I heard even some of the opponents argument has gone from the denial of the reality of global warming to arguing about the reality of human caused global warming. Matt uses one set of data covering the period from 1881 to 2001 provided online by NASA. This pales in comparison to the amount of data covering 2000 years from multiple sources that the serious climate researchers are utilizing.

Nowhere in the posting or the analysis is there any consideration at to the appropriateness of the random walk model to the physical factors that influence the climate of the Earth. Models are useful but they must be grounded in the real world with some basis of justification. The basic question “is this an appropriate model” was not asked.

What did the modeling show? 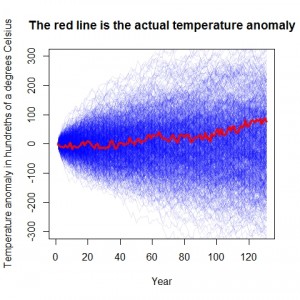 The plot similar to the the one in the original post is shown on the right. The solid red line depicts the temperature trend over the last 131 years. The trend line is apparent and is not something that is seriously questioned in the literature. Fitting a very simple linear regression to the data will yield significant results. The light blue lines depict 1000 simulation under the random walk model which assume the same year to year variability that is in the original data. Noting the wide range of results in the simulations the author claims that it is clear that the actual trend line is well within what could be expected under normal temperature variation under the random walk model.

It is at this point that the author notices the first piece of information that indicates problems with his model. He next examines the data and observes a negative year to year correlation in the changes in temperature. Explaining this he says:

what does a negative correlation mean in this context? It tells us that if the earth’s temperature rises by more than average in one year, it’s likely to fall (or rise less than average) the following year, and vice verse. The bigger the jump one way, the larger the jump the other way next year (note this is not a case of regression to the mean; these are changes in temperature, not absolute temperatures). If anything, this is evidence that the earth has some kind of built in balancing mechanism for global temperature changes,

He had the opportunity at this point to question the appropriateness of his model. The data is telling him that there is a problem but he is not seeing it. Instead he goes on to refine his modelling of the random walk to incorporate the negative correlations. He much too easily dismissive the idea that regression to the mean is a real phenomenon because he is dealing with change estimates rather than with the actual data. In fact his statement “this is evidence that the earth has some kind of built in balancing mechanism for global temperature changes” is recognition that regression to the mean is likely present. 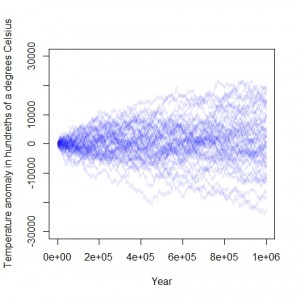 On of the problems in using a random walk to model temperature trends on the the Earth is they have the unfortunate property of tending to wander off to the extremes. The author had modeled the temperature over a 131 year period. By extending the modeling period to a much longer time line the problems with the model assumptions become readily apparent. The plot at the right does just that. It shows the results using the same model data and the same code that the author used to generate his models with the time frame extended back one million years. At the extreme some of the simulations show changes of 200 degrees Celsius over that time period. With an increase of only about 80 degrees Celsius the oceans would boil off. A drop of similar magnitude would result in a snowball Earth. The models of the temperature history of the Earth over the last million years are more on the order of 10 degrees Celsius. This clearly shows that the random walk model as implemented by the author show more variably in the Earth’s climate over time than can be matched to the historical record. A plot of the estimate temperature deviations over the long term can be seen here, here, and here.

Posted by Larry on December 5th, 2012 Posted in Methodolgy Issues