Much has been said about Romney’s record on creating jobs both as governor of the state of Massachusetts and while he was at Bain Capital. Just last week Romney said in one of his speeches:

“While I was governor of Massachusetts we took the unemployment rate from 5.7 percent down to 4.6 percent.”

But was this an accomplishment for which he deserves credit? He could make similar claims about job creation. But does he deserve credit for the jobs created in the state during that time? He seems to think he does. His supporters seem to think he does. 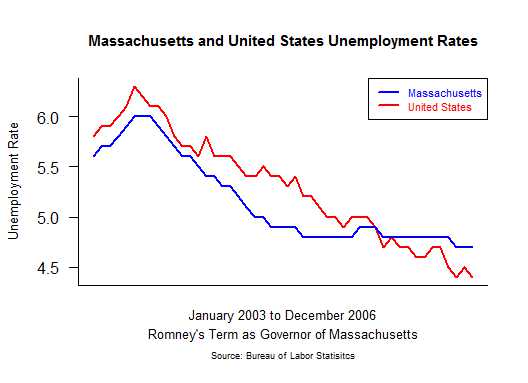 The factor that has not entered into the debates is that state employment and unemployment rates usually reflect what is going on at the national level. With that simple fact a better measure of the effectiveness of a sitting governor is how well the state fares as compared to the nation as a whole.