The polar vortex and the media hype of the cold weather 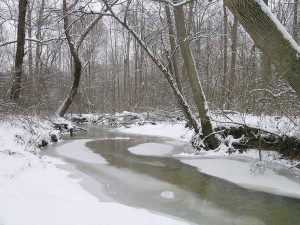 Yes, it was cold. It was very cold. But the media and many in the forecasting profession made what was a perfectly normal weather event into a major story of extreme and rarely seen cold. The Baltimore Sun said “Baltimore’s coldest day in nearly two decades.” And the Washington Post said “Polar vortex delivering D.C.’s coldest day in decades, and we’re not alone.” USA Today did a nice map showing all the cities with new record lows.

A more balance picture of the event was given by Dr. Jeff Masters over at WunderBlog where he pointed out “As notable as this week’s cold wave was–bringing the coldest air seen since 1996 or 1994 over much of the nation–the event failed to set any monthly or all-time record low minimum temperature records at airports and cooperative observing stations monitored by NOAA’s National Climatic Data Center.”

The problem the media got into was claiming that this event was the coldest in decades when in fact that only applied to a specific date in January. A big deal was made when Dulles Airport outside of Washington DC hit a new record low of 1 degree. A little searching at weather.com show that the record low for the airport for the month of January is -18. I’m sorry but a low of 1 degree pales in comparison. It is cold at 1 degree but it is nowhere near how cold it is at -18 degrees. That is the number that should be in the comparison. 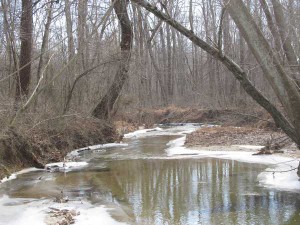 For fun I uploaded two images of a nearby stream. Decide which one was taken this morning. If you picked the first image you are wrong. That one was taken during the cold spell of late January 2004.

But I did not have to go back even ten years to find a similar cold spell comparable to what we had the last few days. I used my weather records where I have lived for the past 30 years. On of my hobbies is addition to statistics is weather. I have a Davis weather instruments station out in the yard that records the weather near the house, and not to far from the stream in the picture in 15 minute intervals.

In the heart of the current cold wave I recorded a low of 4.8 on the morning of the 7th, a high of 18.1 that day, and a low of 4.7 the next morning. Just five years ago on January 16th and 17th it was every bit as cold. On the morning of January 16, 2009 the low was 10.9. The high temperature that day was 17.7. However the next morning the low was -0.2. So in the end one night was about 5 degrees warmer and the next night was 5 degrees colder. The daytime highs were very close to each other.

The graph below captures to temperature comparison over a three day span at both points in time. To me they are very much comparable. I don’t see any metric that can claim that the current cold wave is any worst than that seen just five years ago.

Now this is just one measurement at just one place on the map. But it is indicative of the comparisons that can be made. Claiming that what we just saw over the last few days is the coldest in decades just is not justified. In only holds up when the media focuses on a specific day in January. When considered as part of the overall weather pattern of a winter weather if fails completely. It makes for great media hype, but it does not reflect reality.

Many years ago I stopped at the side of the road in the middle of the summer to buy some freshly picked sweet corn. It was in the upper 90s that day. A business man stopped by all decked out in his nice suit. He said to the old farmer “sure is hot today.” The farmer replied “it’s summer, it’s supposed to be.” Cold weather is normal. Very cold weather is normal. The media likes to tell us every day what are the “normal” highs and lows. That is the new name for average high and low. The average are not the norm. The norm is reflected in the full distribution of temperatures that are seen during the winter. We should be thinking in terms of variance. Thinking in terms of the average is deceptive.

Posted by Larry on January 9th, 2014 Posted in Methodolgy Issues, The Media
(Comments are closed)